Last night I gave a talk at 181 Admiraal de Ruyterweg, the studio where I have been based during my residency with Cultureland here in Amsterdam. Here are my notes from the talk, which explain the thinking behind the project and exhibition.

I am interested in the idea that landscapes collect certain images, and that some of these exist on the edge of our vision, without us looking at them directly. I was drawn to Amsterdam’s Spinhuis (‘spin house’) as a starting point for this project.

The phrase ‘firm is my hand but sweet my mind’ (translated by Dagobert!) are the words carved in stone above the entrance to what was Amsterdam’s Spinhuis, a women’s prison where women spent their days spinning and sewing. They were made in 1645 and sit alongside a carving of a woman being whipped as she sews, by another woman who is in charge. So the meaning of the words, you would think, is ‘although what I do is cruel, it is for your own good.’ When they are taken out of context, you ask of the words, whose hands are we talking about? Whose mind is sweet? And, in the context of sewing, who has the firm hands round here?

To me, the words also announce that one’s actions may be at odds with one’s intentions. That you might do one thing but think another. That hands and mind may be in opposition. I am interested in the actions of the unconscious and of the conscious in image-making and in the idea that while you think you are conscious and fully in control of your material, your unconscious is also working on it. I haven’t done any textile work before, so this feeling of not being fully in control has been particularly true! The difference between the careful pencil drawings and the freer textile pieces in the next room responds to this. To the idea that two versions of the same story exist side by side, whether that story is the story you tell about your life or the story society has told about its actions.

So, I started by drawing the painting The Regents of the Spinhuis and Niewe Werkhuis by Karel Dujardin, painted in 1669, which hangs in the Rijksmuseum, but drawing only their hands. At our initial meeting here, at the start of the residency, Aafke told me that it was a sign of wealth, in the period of the painting, to be able to afford to have the hands painted, as well as the faces. These men, responsible for the women whose days were spent spinning, whose punishment was to work with their hands, had their hands depicted for all the world to see what good work they were engaged in.

This is what the sign next to the painting says:

A servant bringing a letter temporarily interrupts a meeting. the other five men are the regents of the Amsterdam Spinhuis, the female house of correction. The women imprisoned there for theft or begging spent most of their days spinning. Affluent citizens like these gentlemen administered these sorts of institutions. Thus was civic peace maintained.

There is a conflict then, if we return to our Spinhuis women, between their strong hands, busy spinning and sewing, and the politically strong hands of the Regents that we see in the museum, who ran the prison.

I have been reading a new translation of the Odyssey – the first translation into English by a woman. The hands of Penelope are described as ‘muscular’. The translator says that translations have struggled in the past to translate the Greek as the word is something like ‘thick’ or ‘strong’. Previous, male, translators have not wanted to use words we would not normally use to describe a woman’s hands. In her note the translator says that she chose ‘muscular’ because Penelope is always weaving, so it would make sense that her hands would be strong.

Maud kindly introduced me to Martin Ex, who lives over the road, and is a dealer of antique samplers. I went to visit him in his shop, where he showed me beautiful examples of careful embroideries full of delicate stitches. He explained to me that samplers served both a practical and a moral purpose. Practically, a sampler was a way for girls to collect stitches, which they could then refer to later on – like a pattern book. For this reason samplers would often be passed from mother to daughter, across generations, as they were practical learning tools.

But they also served another purpose.

The girls who made them would have been from good families, able to afford for them to have an education. A good sampler would not have been hung on a wall – they were not made to be displayed – but would have been kept in a drawer. This colossal technical accomplishment would have been rolled up and put away after it had served its first purpose, as a sign of accomplishment, not just technical but also of virtue: proof that a new wife would be able to sit quietly, concentrate, apply herself, have patience. All feminine virtues.

This idea of putting women on the right track – of making them good – through sewing is the same idea we see in the Spinhuis which was intended not just to imprison but also to correct, to improve, the women kept there.

So while there were poor women spinning thread at the Spinhuis, there were wealthy girls making samplers. These activities would be taking place side my side in the city, streets away from each other. And the principle of moral improvement through sewing is the same in both cases, for the poorest women and the richest ones, though their circumstances were very different.

Meanwhile the men who governed the city were paying to have their hands painted.

Martin Ex also told me, really interestingly, that presumably portraits of some of these girls would have been painted, as they would have been the daughters of the wealthy merchants who were commissioning such family portraits. But it is impossible to match them up. It may well be that some of the richly embroidered samplers that have passed through his shop were made by girls whose portraits now hang in the Rijksmuseum. I like the idea that there are these two material legacies of such girls: the public paintings and their own, private samplers.  I have collected some of the daughters from paintings in the Rijksmuseum, and it is their silhouettes you see here on the loom. 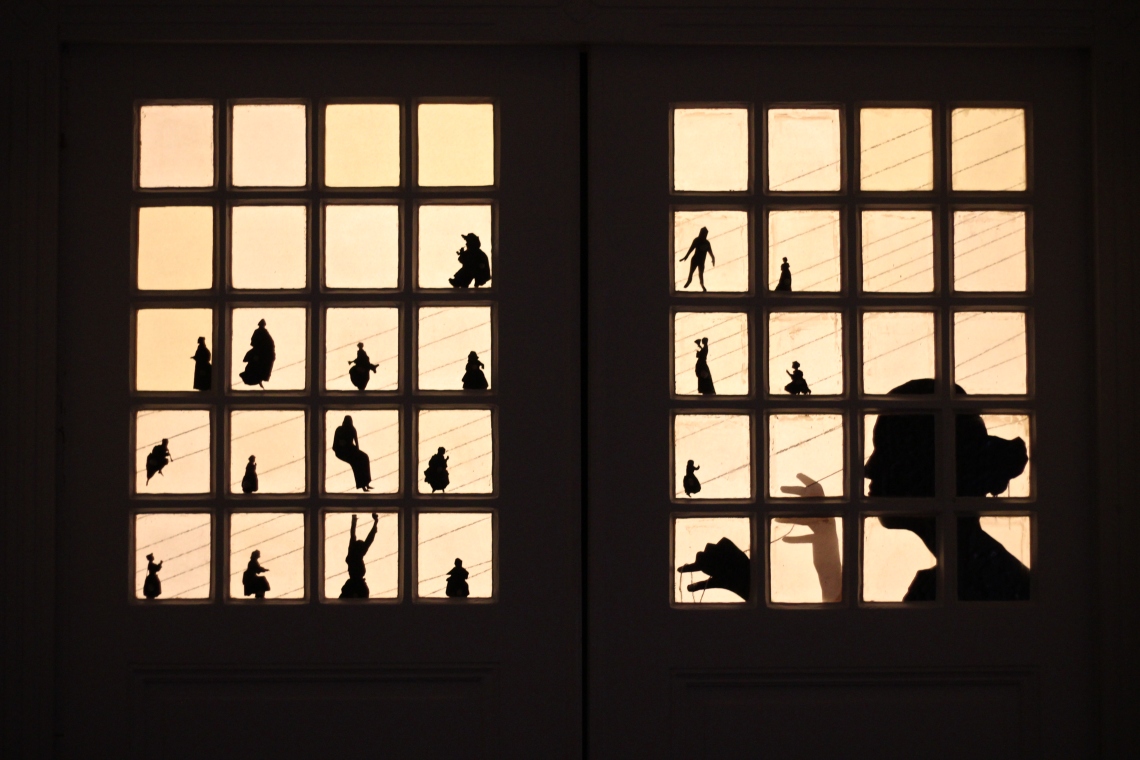 The idea of many hands at work translated into how I approached Starnmeer, where the landscape has been shaped by poldering – by careful planning and work. The agricultural landscape as something that is woven out of the natural fabric of the place has a parallel with spinning. Windmills have worked, like spinning wheels work, to spin natural materials into something usable by people, and from which a profit can be made. When sewing you work with the natural weave of the material to make your design, and the same is true of the polder landscape. Some of the textile pieces in the other room depict the straight lines, bits cut out, canals, ditches and enclosures, of the landscape at Starnmeer in this way.

It has been my project to work within the standard dimensions of traditional samplers, which were usually made on bands like this – strips of material that were not too expensive to buy and were easy to roll up. As well as working from the landscape, I have incorporated imagined figures of the girls who would have made such samplers. I’ve been interested in how as soon as a figure is placed in the fabric, how we read it changes entirely. A sense of scale is introduced; we read the criss-cross forms and abstract patterns as a landscape, a background. So I have displayed a mix of figurative and non figurative textile pieces side by side.

I have used other, real discarded images of women in some of these pieces too. You can see the strange and not traditionally feminine figure smoking her pipe, next to the formal arrangement of figures of the regents of the Spinhuis. For this reason, I have worked on offcuts of fabric to make these textile pieces – on cheap bits that get left behind. The ‘coupons’ in buckets in Albert Cuyp Market. I’ve also used pieces of material from Starnmeer, where Dagobert kindly let me make use of his mother’s sewing supplies.

While I’ve been here I have been reading a book about the feminine in fairytales by a psychotherapist and scholar who worked closely with Carl Jung, Marie Louise von Franz. I recently made a short film based on on the story of sleeping beauty, so I was particularly interested in the section about sleeping beauty and the symbolism of the spindle.

I wanted to quote a section from her chapter on this. “We should go into the problem of the spindle, which is a symbol of femininity. In medieval Germany one speaks of ‘spindle kinship,’ just as one speaks of the ‘distaff side of the family’ in referring to relations on the mother’s side. It was a sign of Saint Gertrude in the Middle Ages, who took most of the qualities of the pre-Christian mother goddesses such as Freja, Hulda, Perchta and others. The spindle is also an attribute of the wise old woman and of witches. The sowing of flax and spinning and weaving are the essence of feminine life with its fertility and sexual implications. Flax was also regarded as having to do with feminine activities. In many countries women used to expose their genitals to the growing flax and say, ‘Please grow as high as my genitals are now’. It was thought that the flax would grow better for that. In many countries flax is planted by women, for it is linked up with their lives’.

I have explored this idea of a relationship between women, their hands, their genitals, the landscape and textile work in my samplers.

Marie Louise von Franz goes on to say ‘Everybody who has knitted or done weaving or embroidery knows what an agreeable effect this can have, for you can be quiet and lazy without feeling guilty and also can spin your own thoughts while working. You can relax and follow your phantasy and then get up and say you have done something’

Again, there is this idea that such work allows the mind to go elsewhere, absorbed in activities of its own while the hands continue with their work. That your hands might be firm while your mind is sweet.

Hands are both intimate and public, and by making a series of drawings alongside the textile work I have tried to bring the relationship between the thing and the making of the thing to life.

In my drawings the hands represent the conscious at work. It’s the same in this film, where the modern hands edit and shape the stories of the past – the archive footage. My samplers show the unconscious formation of images. My work in general is about how we edit our pasts to make something we want to keep, to put on record. How we tell our stories. While the shadows of the stories we don’t want to tell remain on the edge of our vision.

On Starnmeer, the logic of the straight lines of the cultivated, made-made, polder landscape contrast with what the landscape would have been originally – naturally. Water is always a symbol of the unconscious and I have found that the landscape here in the Netherlands is like a testimony to the idea that a balance – a reciprocal arrangement – between conscious and unconscious – is necessary. It’s a  balance between culture and land, between land and water, between hands and mind, between firm and sweet.

View all posts by shipsbiscuit